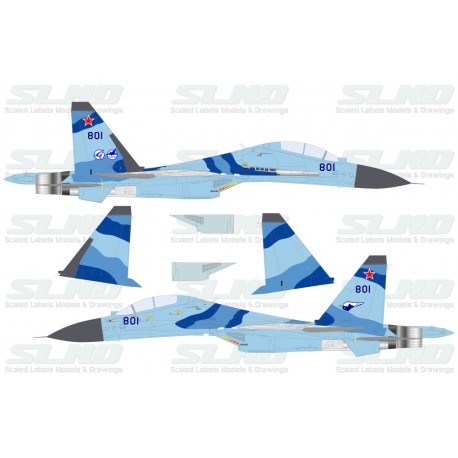 The Su-30MK fighter did not become the last in the extensive program of modernization of the thirtieth series of fighters. With the help of KnAAPO, it was possible to develop and in 2000 to complete the construction of another version of the two-seater multipurpose aircraft, the Su-35UB (T-10UBM). His tests began in the fall of the same year in Zhukovsky. The first prototype has a dark blue tail number "801" and is painted in blue, blue and dark blue. It would be possible to conclude from the name of the fighter that it is a combat training modification of the Su-35 aircraft . However, this is not the case. The plane was supposed to absorb all the best that was done on the Su-37 and both versions of the Su-30MK - Su-30MKI and Su-30MKK. It was planned to install on it the most advanced avionics and modified AL-31FP engines, in which the nozzle would rotate in two planes (at first, the prototype was equipped with conventional AL-31F ). According to the project, the Su-35UB differed from the Su-30MKK engines by the presence of PGO and more advanced on-board radar, and from the Su-30MKI by engines and keels of increased height, thickness and area (as on the Su-35 and Su-30MKK), which allowed to increase the range flight compared with the Su-30MKI. The installation of more advanced equipment, in particular, the H011M airborne radar, will allow the Su-35UB to use the entire range of serial and advanced air-to-air and air-to-surface missiles and bombs.

The aircraft has 12 weapon suspension points, is equipped with an air refueling system and the most advanced avionics.

Interestingly, for the first time at the KnAAPO, the design of the Su-35UB and the release of working drawings were carried out with significant use of computer technology. The first flight of the prototype took place in 2000.

Be the first to write your review!

16 other products in the same category: